Welcome back to the It’s Brewin at McEwen blog. Make sure you subscribe to our email list below so you don’t miss any of our posts.

Processing…
Success! You're on the list.
Whoops! There was an error and we couldn't process your subscription. Please reload the page and try again.

Article highlights:
– John’s take on the series win over Niagara
– The “Big 3” weekend starters are here (by John)
-Mark breaks down the “#ArmFarm Showcase”
-If I could set the batting order & defense (by Mark)
-In depth preview of the team out to the east (By Matt)

This past weekend against Niagara University marked the last weekend series against a non-conference opponent for the remainder of the season. It also marked the first series in which our highly anticipated Big-3 starting rotation were able to headline a weekend stat sheet & they did not disappoint.

While there are still some issues that need to be addressed on our roster, everything really seemed to come together this past weekend and with conference play on the horizon, the timing was perfect.

RS-sophomore Orion Kerkering started the weekend off on a high note, dominating the purple eagles to a tune of 0 earned runs over 7 frames, walking 0 batters & fanning 8. The defense also backed him up with a good performance of their own, only allowing 1 error on the night.

Freshman phenom Jackson Mayo continued his trend of having big games on Friday nights, opening the scoring in the bottom of the first with a backside RBI single. This was quickly followed by a 2-run double from the red hot RS-junior, Roberto ‘Chamo’ Peña. The Bulls wouldn’t look back from there as 3 different Bulls turned in multi hit games (Mayo, Brutcher, & Ruiz).

Despite some late inning fireworks, RS-junior Devin Hemenway relieved freshman Tyler Dietz, who ran into some troubles with one out in the ninth, to secure the 9-4 victory.

The blows kept coming for the Purple Eagles on Saturday as RS-sophomore Jack Jasiak took the mound in his second start since returning from a short stint away from the rotation.

While seemingly on a pitch count, he made sure to take full advantage of every pitch thrown & every batter faced. Jack was able to work through 5 innings allowing only 1 hit and 0 earned runs on the day, while also not walking a single batter. Not only did Jack come to play that day, but our bullpen delivered in elite fashion, combining for 4 innings pitched, 2 hits, 6 Ks, and only 1 earned run.

RS-sophomore, Ethan ‘Boogie’ Brown responded nicely to adversity in his one inning of work, stranding two early base runners to put up a scoreless frame. In addition, fellow sophomore Caleb Pundsack bounced back strongly from his prior appearance, allowing 0 hits & 0 earned runs with one strikeout in his lone inning of work.

On the offensive side of the ball, junior Roberto Peña stayed hot, opening the scoring with a 2-run HR in the bottom of the first inning. Also, junior Nick Gonzalez turned in a two hit day and sophomore Ben Rozenblum broke the game open with a 3-run double in the 4th inning. The Bulls would go on to win this game by a count of 7-1.

Why do people go to church on Sundays? Well it’s simple, it’s The Lord’s Day. Brad Lord took the mound Sunday, delivering in holy fashion to round off the best weekend we’ve seen from our starting pitching, collectively, this season. Brad was able to work through 4 innings of one-hit baseball, striking out 6, surrendering 0 walks, and allowing 0 earned runs. While he did not get the decision in this one, it was a promising step in the right direction for this insanely talented junior out of Crawfordville, FL.

On the relief pitching side, sophomore Hunter Mink got his first work of the weekend, tossing two more scoreless innings of baseball, securing his second win on the season, & extending his scoreless streak to 15.2 innings. This was followed up by another great performance by RS-senior Joseph Sanchez who tossed 1.1 scoreless innings. Over his last 3 appearances, Sanchez has thrown 5.1 innings, allowing only 4 hits, 2 walks, and 1 earned run. The Bulls had command of this game throughout, winning by a final of 11-3.

The Bulls dominated a mid-week game at home vs. the Bethune Cookman Wildcats. Freshman pitcher Jack Cebert got the start and tossed 1 inning allowing 1 run. After that, Coach Mohl turned the game over to an array of relief pitchers who each tossed 1 inning respectively.

Here are my thoughts on the 7 different scoreless innings thrown by Bulls pitchers in the game that I’m gonna call the “#ArmFarmShowcase”:

Nolan Hudi (2nd inning) – the freshman LHP continued an impressive run of appearances out of the bullpen with a scoreless frame. Over the span of his last 4 outings, Hudi has given the Bulls 6.1 innings while only allowing 1 run and striking out 4.

Tyler Dietz (3rd inning) – the freshman RHP looked sharp while facing the minimum (3 batters) in his scoreless inning of work. After getting the first batter to ground out to 2B, Dietz allowed a base hit. However, the next batter grounded into a 5-4-3 double play. Dietz sat 90-92 mph (T93) with the fastball and also dropped in a 84-86 mph slider for strikes.

Joey Volini (4th inning) – it was exciting to see the freshman from Tampa Jesuit HS make his collegiate debut. The young lefty looked like a seasoned veteran out there. He works quickly, is mechanically sound, and attacks the zone. Volini gave the Bulls a scoreless inning and 2 strikeouts. He struck the last batter of the inning out swinging on a nasty breaking ball that tailed away from the left handed batter. Volini could carve himself out a role in conference play.

Tommy Groom (5th inning) – the freshman RHP continued his strong start to his Bulls career. Groom threw a scoreless inning which was made possible by his 90-91 mph fastball that has good arm side run and a hard biting 83-84 mph slider that is at its best when kept down. Through 5.1 innings, Groom holds a 0.00 ERA.

Ethan Brown (6th inning) – the sophomore LHP looked really sharp in his final tune up before conference play. He struck out the side in a scoreless inning of relief. Brown was able to blow his fastball by BC’s hitters and sat at 91-92 mph topping out at 93 mph twice.

Austin Grause (7th inning) – the freshman RHP from local Gaither HS (Tampa, FL) had a solid outing for the Bulls to continue his strong 2022 campaign. Grause threw a scoreless inning and struck out 1. In this outing, his fastball sat 89-90 mph and curveball was 74-76 mph. Through 7.2 innings as a Bull, he’s only allowed 1 run (1.17 ERA).

Devin Hemenway (9th inning) – the junior LHP gave the Bulls a scoreless inning and struck out 2. His control looked really good as he was able to spot his fastball (87-88, T90) on the inside corner of the plate (glove side to RHB) multiple times for strikes. His ERA is now at 3.29 through 13.2 innings.

The big story with USF Baseball right now is that conference play starts tomorrow. With that, the coaching staff has had 25 non-conference games to get an idea of which starting 9 gives them the best opportunity to win games at this point in time. 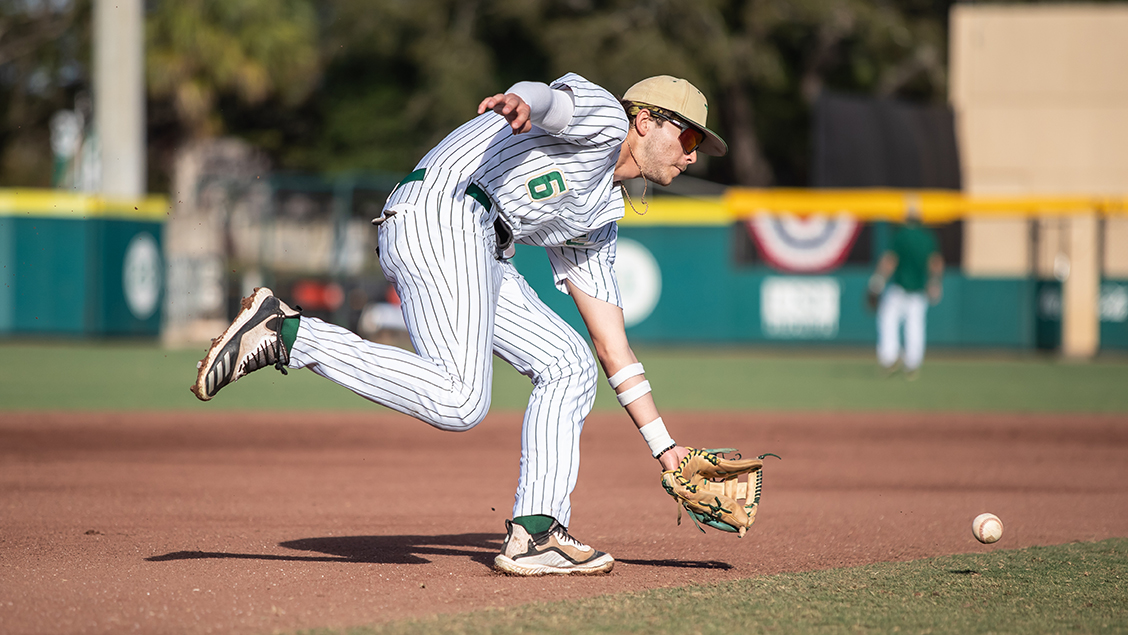 To me, there’s been players that have earned the right to be in the starting lineup on Friday night when you consider both their performance this season and historical track record.

If I could set the lineup for Friday night (spoiler alert: I can’t, I’m not Coach Mohl), this is what it would look like:

*Note: I also expect to see some Nick Gonzalez this weekend. When Rivera gets a day off catching, Rozenblum fills that spot and then Gonzalez/Ruiz hold down the middle infield. The 4th year RHB has been hitting well lately and has a .324 average in 37 at bats this season.

Top reserves: Marcus Brodil, Keanu Jacobs-Guishard, and Joaquin Monque are who I’d most likely expect to see in pinch hit situations. They’ve all had some strong moments in 2022 and are very capable of putting it together with consistent at bats.

Conference Play Begins With War On I-4: UCF Preview (by Matt)

The Knights however do return a lot of talent from last year’s roster as well as adding significant pieces through the transfer portal and recruiting process.

The Starting Rotation (by Matt):

For much of the season, the Knights rotation has been anchored by Connor Staine (RHP, RS. So, Sat.), a transfer from the University of Maryland, returner Hunter Patteson (LHP, RS. SO, Sun.), and returner David Litchfield (RHP, RS. Jr, Fri.). Staine & Patteson in particular this season have been spectacular for the Knights, with Staine not surrendering an earned run in 24.2 IP, and Patteson only allowing 4 ER in 24.2 IP (All to #1 Ole Miss at the time).

While those numbers are eye popping, the impressive 1-2 punch endured injuries in the same weekend set recently against UNCG, and to what extent they will pitch this weekend is still up in the air.

Luckily for the Knights, they did get Staine back in last weekend’s series vs. Samford. Staine, on a very limited pitch count of 30-35 pitches pitched 2.0 IP, 1 H, 0 ER, 1 BB, and 1 HBP. If all went well for Staine last weekend, expect him to pitch anywhere from 60-85 pitches this weekend..

As for Patteson, he was removed from his last start against UNCG after only 2.0 IP on 3/20 for precautionary measures. Interestingly he did not appear in last weekend’s matchup, and in a 3/25 interview with head coach Greg Lovelady, he was very vague on a timetable for Patteson’s return.

That leaves the rotation with only David Litchfield at 100% from the Knights opening weekend rotation. Litchfield has been rather inconsistent this season in the rotation after being a very productive piece of the team’s bullpen last year.

If Patteson is unable to start once again this weekend, the Knights will have to once again rely on weekday starter William Saxton, (RS. SR, FIU Transfer)  to fill the void. Saxton has been very effective this season in 9 appearances (4 out of the bullpen, and more recently 5 starts). In 9 games this season, Saxton has compiled a statline of (1.17 ERA, 23.0 IP, 3 ER, 18 BB, 23 K). He pitched his most recent start this past Tuesday against FAU, but limited his workload to only 37 pitches in 2.0 IP, which should give the Knights options for this weekend.

The Bullpen (by Matt)

UCF brings 2 quality arms out of the bullpen, and they use them a good bit. Cameron Crain, a (RS. So, LHP) transferred in this season after pitching his first two years at Johnson County Community College (Kansas). Last season at Johnson County, he had 48 Ks in 31.1 IP to go along with his 1.72 ERA. So far he has carried that success to the division 1 level and is tied for the team lead in relief appearances, as well as leading the bullpen arms with a 2.13 ERA. He comes into the weekend with 12.5 K/9 IP as well.

Zack Hunsicker (RS. Jr, RHP) comes into this game also tied for most relief appearances, and has substantial experience with the Knights. Hunsicker has appeared in 56 games in the gold and black dating back to the 2019 season. This season, he leads the bullpen in WHIP (1.10) of the pitchers with at least 4 appearances, has an impressive 1.4 BB/9 IP, and a respectable 3.29 ERA as well.

If pressure situations arise, look for these 2 names to take on the challenge.